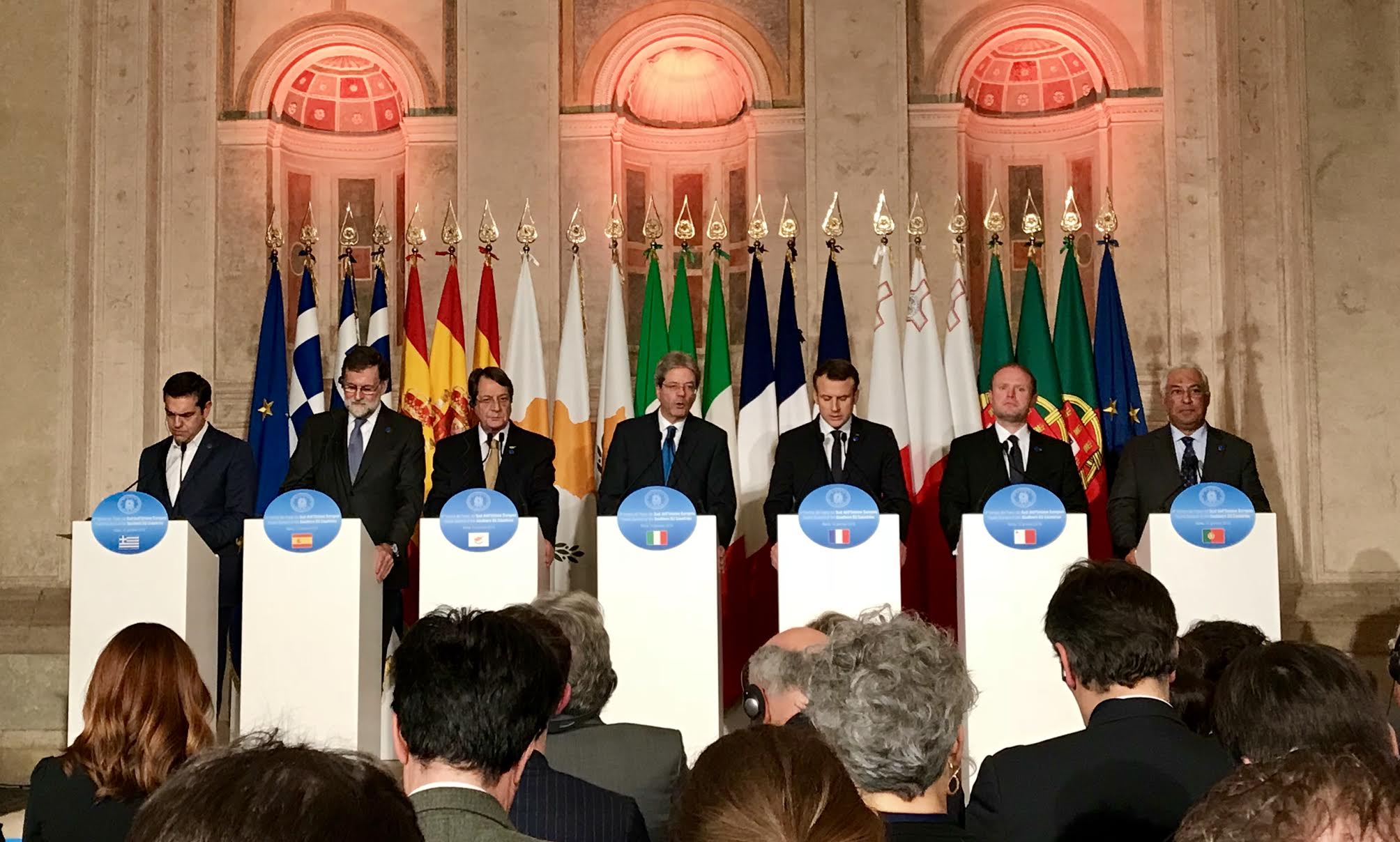 Declaration of 4th Summit of South EU states: “Bringing the EU forward in 2018”

1) We, the Heads of State and Government of the Republic of Cyprus, France, Greece, Italy, Malta, Portugal and Spain, have convened in Rome for the fourth Summit of the Southern European Union countries.

2) At the beginning of a year of full economic recovery after a decade of financial crisis, the EU is back to a path of growth. In times of hardship, the Union has developed new governance instruments and strengthened its capacity to react to global challenges. Much has been achieved following a combination of reforms at national level, fiscal discipline and investment. Europe is safer and stronger, but much remains to be done. A more  sovereign, social and democratic Europe, which can be a leading model in the world, is our way forward. Together, we can address our citizens’ needs by setting a common ambition whilst being open to the involvement of all committed Member States, as we have just done in the field of defence.

3) In Rome, in March 2017, we established an ambitious Agenda and pledged to work on all those issues that concern our citizens most: a safe and secure Europe, a prosperous and sustainable Europe, a social Europe, a stronger Europe on the global scene. In each area we have made concrete progress. We need to continue working in order to deliver tangible results  in this direction.

4) It will be key to fully combine economic growth and social wellbeing. Further steps to complete the Economic and Monetary Union (EMU)  are necessary to achieve more sustainable and balanced growth, competitiveness, quality employment and convergence. The future EMU should be more resilient, growth-friendly and democratic, so as to further consolidate that area of prosperity which constitutes the basis of the European project. Completing and strengthening the Banking Union  is a priority. A common backstop to the Single Resolution Fund and a European Deposit Insurance Scheme should be established as soon as possible, in line with the need to combine the objectives of risk sharing and risk reduction. Discussions should be taken forward on the possibility of having a fiscal capacity with an investment and stabilization function within the EMU to foster long term productivity, increase its ability to react to economic shocks and avoid long-term negative effects on our societies. The fiscal framework should provide the right incentives for growth-friendly fiscal policies and continuous reform efforts and achieve the right balance between sustainability and stabilisation. The ultimate objective of an effective EMU should be the progressive convergence of the Member States towards sustainable and socially inclusive growth.

5) It is time to focus on EU policies which are clearly identified by our citizens as core priorities for action. We will continue promoting the efficient functioning of the internal market, as well as economic, territorial and social cohesion. We commit to a new approach on European public goods, which should be supplied within the EU budget in the new Multi-Annual Financial Framework (MFF). We want to provide: co-management and co-financing of migration policy at European borders; a fully implemented European Defence strategy based on joint financing, shared ambitions and a common strategy; scaled up internal and external security capabilities; a permanent investment plan focused on innovation, with relevant externalities across Member States,  which include the completion of the Single Market, especially as concerns the Innovation Union, the Digital Union, the Energy Union and the Capital Market Union. In this perspective, a coordinated corporate taxation policy, in line with international standards, can be envisaged. We need an enhanced mobility of young generations across Europe and a more ambitious education and culture policy at the EU level, as decided in the December 2017 European Council (Erasmus, European student card, European universities, mutual recognition of secondary and higher education degrees, lifelong learning). We also have to strengthen the European citizenship, through EU programmes investing into future generations to reinforce integration.

6) We must implement the European Pillar of Social Rights proclaimed in Goteborg, at Union and Member State level. The European Council of December 2017 has stressed the need to implement a new package of initiatives in the field of health, gender, labour and social protection. Promoting a more balanced and sustainable development, encouraging necessary reforms and enabling social safety net schemes are the most important lessons we have learnt from the financial crisis.

7) All citizens have the right to live free from fear. Security is crucial to ensure that all Europeans live a life rooted in democracy and freedom. We are determined to continue to thrive on openness and to fight those who oppose liberties and civil rights. Europeans must take greater responsibility for their security and do more to fight terrorism. The defence of European countries matters for the protection of EU citizens and the credibility of the European Union as a whole. European action shall be aimed at addressing regional and global challenges with a special focus on the Mediterranean, EU’s immediate Eastern neighbourhood, and Africa: a democratic, stable and prosperous neighbourhood is a strategic priority and in the fundamental interest of the EU.

We closely follow and reiterate our support for a viable comprehensive settlement of the Cyprus problem, in line with the UNSC resolutions and the EU acquis, that reunifies Cyprus and its people, and which safeguards Cyprus’ sovereignty, independence and territorial integrity, without guarantees. The Republic of Cyprus is and will remain a member of the European Union after the settlement, and EU membership is the best safeguard for a reunified Cyprus.

8) The management of migration flows will be a fundamental challenge for the European Union in the years to come. The Southern EU countries are particularly concerned and affected as they are at the forefront of the EU external borders. Our fundamental role and burden of protecting those borders must be acknowledged and shared by the EU. The EU will have to redouble its fight against human trafficking and new forms of slavery, guarantee human rights of all persons and protect those in need of international protection, particularly the most vulnerable groups.

We are strongly committed to a common European migration policy, to prevent irregular flows as well as to address the root causes of mass migration in dialogue and cooperation with the countries of origin and transit. We are determined to strengthen our partnerships with those countries, particularly in Africa. The full implementation of the EU-Turkey Statement, in an Aegean where international law is respected, is needed. Given concrete success achieved in the external dimension of migration in recent months, adequate funding to existing financial instruments should continue, including the EU Trust Fund for Africa and the EU-Turkey facility , also with a view of establishing fully funded financial instruments in the next MFF.

We firmly believe that positive outcomes on the external dimension of the Migration Agenda need to be complemented by a determined effort to build a new and fair Common European Asylum System (CEAS) based on the effective respect of the principles of responsibility and solidarity, especially towards frontline Member States.

9) We  support all initiatives aimed at fostering democracy and citizens’ participation. In this respect, we welcome the idea of citizens’ consultations, all over Europe, on core priorities for the future of the European Union, that could be organised from next spring. In the same spirit, transnational lists of Members of the European Parliament to be elected at European level could strengthen the democratic dimension of the Union.