Due to the 20th anniversary of the Franco Italian University / Università Italo Francese (UFI / UIF), a conference was organized on Wednesday 21st November at the Ministry of Higher Education, Research and Innovation. Numerous personalities from the scientific and academic community of both countries participated in this day dedicated to the challenges of artificial intelligence. 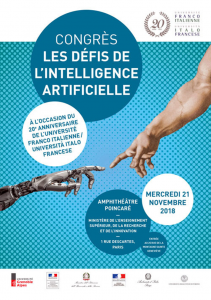 Jean-Paul Roumegas, International and Partnerships Adviser from Cnous, coordinator of the project of European student card, president of ECStA, participated in the opening of the congress organized for the 20th anniversary of the Franco-Italian University.

As the French Minister of Higher Education puts it in her inaugural speech, at the opening of the commemoration of the 20 years of the Franco-Italian University, emphasized: “the development of European universities advances today by using innovative tools such as the European Student Card, which has been in use since the start of 2018 academic year. The project, which was born out of a Franco-Italian initiative, counts now 43 member universities, including 17 French and 5 Italian”.

The congress opening was an opportunity to take stock of this 20 years network and to recall the missions and the privileged role in the context of European universities. This project is a will of the President of the French Republic and has been taken over by the EU Heads of States meeting in Göteborg in November 2017, and already at the heart of the new Erasmus + program.

By building joint, polycentric training paths, European universities will face a major challenge: harmonization beyond universities, national training systems. They will inaugurate a new stage of European integration, as recalled by Federico Cinquepalmi, International Head of the Italian Ministry of Education and Research.

After the Bologna Ministerial Conference held in Paris in May 2018 and praised the European map, the Bologna Process Secretariat moves from France to Italy. Born from a Franco-Italian initiative in 2013 this project should therefore benefit from favorable winds for the next conference, in 2020 in Rome.

See Publication of 21.11.2018 on the website of the French Ministry of Higher Education: